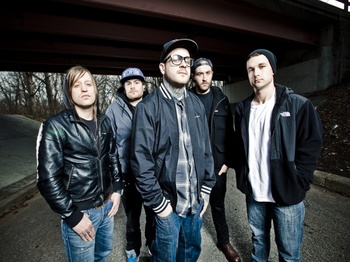 Pictured: Frankie Palmeri in the center, and a bunch of guys who won't stick around.
Advertisement:

Emmure is a Deathcore band from Connecticut. Originally formed as a project between vocalist Frankie Palmeri and rhythm guitarist Ben Lionetti. The latter left in 2009, as did most of the band. Since then, it has been Palmeri and anyone near him who will play instruments. Emmure began as a pretty straightforward Deathcore with their 2007 debut album Goodbye to the Gallows, but overtime integrated Nu Metal elements in their music, which by 2014's Eternal Enemies, became just as prominent, if not moreso, than the deathcore sound.

In 2015, all current members besides Palmeri left the band, sighting issues with dealing with him. He has since formed a new Emmure with a new set of instrumentalists. Yet again.

I'm probably the WORST TROPE YOU EVER HAD!