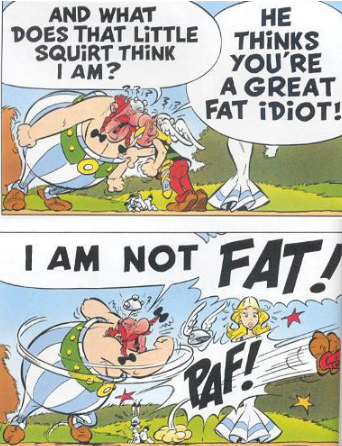 Okay, Asterix. Now you've done it.
Cell: Does Gohan know, by the way?
Trunks: Know what?
Cell: That you let [his future self] die?
(waves crash against the island as the Trauma Button registers)
Trunks: ... I'm going to power up now.
Cell: *winks* I'd be disappointed if you didn't!~
— Dragonball Z Abridged
Advertisement:

The Fisticuff-Provoking Comment marks the point in a dispute when verbal violence escalates to physical violence. Typically, it occurs during a heated argument when one character goes too far and says something so deeply insulting and/or offensive that the other character responds with force.

Similar to Rage Breaking Point except with a Fisticuff-Provoking Comment, the character is already expressing his rage before the punches fly. Also similar to Berserk Button except that trope often involves people making innocent comments that inadvertently trigger someone and the same words, phrases, and subjects always touch off a character. In contrast, a Fisticuff-Provoking Comment depends upon the context and circumstances the offensive statement is made. There may be times when the same offending words and phrases won't elicit any type of violent response from the character. Also, a Fisticuff-Provoking Comment is often something that would reasonably enrage someone thereby making the recipient's physically violent response a foreseeable outcome. It can be the reason a character who Can't Take Criticism reacts violently and be an example of someone trying to win an argument through Appeal to Force.

Can overlap with Talk to the Fist but that trope is about interrupting someone else while they're talking, whereas the Fisticuff-Provoking Comment is timing-insensitive.

Sometimes immediately after the Fisticuff-Provoking Comment and before the violence begins, the character-who-is-about-to-physically-attack-the-other will say something like "Them's fightin' words!", "[Verb] This!", or some variation on "Shut Up, Hannibal!" Other times, it will be a Pre Ass Kicking One Liner or Pre-Mortem One-Liner in more extreme cases. A Turn the Other Fist fake-out can also occur.

Argument of Contradictions, Cavemen Versus Astronauts Debate, Passive-Aggressive Kombat, Volleying Insults, I Shall Taunt You, Trash Talk, Unsportsmanlike Gloating, Your Mom (and especially I Banged Your Mom), and "The Reason You Suck" Speech can lead up to the Fisticuff-Provoking Comment. A Bar Brawl, Diner Brawl, Escalating Brawl, Big Ball of Violence, Cat Fight, Glove Slap, Throwing Down the Gauntlet, Duel to the Death, Blood on the Debate Floor, and Armor-Piercing Slap can result afterward. Someone pulling a Wounded Gazelle Gambit may purposely say something to trigger violence.

A frequent occurrence on a Talk Show with Fists.

Contrast with Hit Me, Dammit! if the punchee explicitly wants to be punched.

Sub-Trope of You Wouldn't Like Me When I'm Angry!.

The first time, Homer and Abe are at the mall trying to peddle Abe's homemade aphrodisiac. Homer approaches a man saying, "Hello sir! Yes, you look like a man who needs help satisfying his wife." The would-be customer responds by punching him in the face.

The first time, Homer and Abe are at the mall trying to peddle Abe's homemade aphrodisiac. Homer approaches a man saying, "Hello sir! Yes, you look like a man who needs help satisfying his wife." The would-be customer responds by punching him in the face.