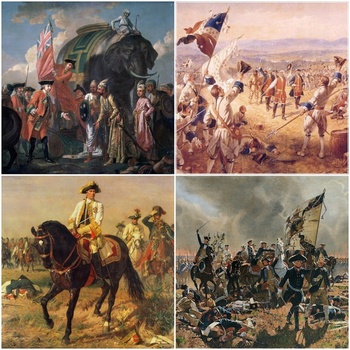 Come cheer up, my lads, 'tis to glory we steer
To add something new to this wonderful year
Hearts of Oak are our ships, Jolly Tars are our men
We always are ready, steady boys steady
— "Heart of Oak", British patriotic song by David Garrick
I'm Frederick the Great, I am
Frederick the Great I am, I am
I got married to a woman I don't love
'Cause war is all I've time for thinking of
— satirical lyric from a history website
Advertisement:

Fought from 1756 to 1763, this was one of the most important wars in history and the largest of the classical 18th-century power struggles. It pitted a coalition of Britain, Prussia, Portugal, and a few minor northern German states against an opposing alliance of France, Austria, Russia, Spain, Sweden, and most of the other German states. It was in a way a bipolar war, consisting of the struggle between various (mostly German) families (and the realms they ruled) for control of Central Europe and the struggle between Britain and France for control of overseas markets and colonies, mainly in North America, with more minor actions in South America and southern India. The latter aspect of the war has led some historians to label it the real "first world war", as fighting took place on every inhabited continent except Australia.note Yes, there was a small African theatre in this war: the British took the French outposts in Senegal during this war. These were returned to the French at the conclusion of the war.

Its result led to the founding of The British Empire and a secessionist British state that would, two centuries later, become more populous and richer than her (via The American Revolution). On the other hand, it also marked the end of the first French Colonial Empire overseas and arguably caused her to turn inward to Europe again during the Revolutionary and Napoleonic wars. Most notably, the war marked the ascent of Prussia to Great Power status when she finally managed to conquer just enough territory (from the Austrian Habsburgs) to be able to put up a decent fight against the other Great Powers. However, on the Prussian part, the war was a very dangerous wager that it could not possibly have survived, let alone won - they only came out on top because nobody was willing or able to test whether Prussia was still up for a fight after the war. This has been referred to as the "Miracle of the House Brandenburg"

, which may or may not have caused a Prussian belief in a invincible military, which was further reinforced through the Franco-Prussian War and would prove disastrous for Germany in both world wars.

There was fighting in several theaters including Central Europe, Western Europe (inc. Iberia), North America (mainland and Caribbean), and India. (Minor theaters included Brazil, West Africa, and the Philippines.) Given the nicely global spread of the fighting this has been posited as the first 'world' war, though why exactly it should get this designation when the War of the Austrian Succession, War of the Spanish Succession, or various Anglo-French colonial spats don't isn't clear. The way all three major theatres were seeing action at the same time is a biggie, though, as is the involvement of all six of the great powers simultaneously (unless one still considered China to have qualified at this point, this being around the start of the Great Divergence).

Often referred to in the US as the 'French and Indian War', what with the British North American colonies being restricted to - you guessed it - raising handfuls militia to defend against small-scale French and Indian raids and launch little raids of their own. It also marked a crucial turning point in the history of Canada, as the colony of New France was ceded to the British by France - setting the stage for Canada's later development as a bilingual country and (with the introduction of lots of fresh immigrants to sideline them) loyalty to the national government during the next British Civil War (aka 'The American Revolution'). To French-Canadian populations this war is often referred to as La Guerre de Conquête ('The War of Conquest'), since effectively, that's what it was from a French-Canadian perspective.