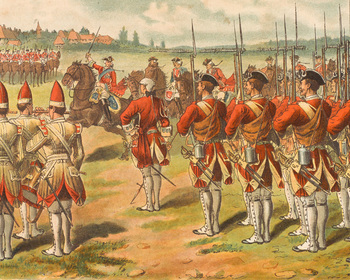 Return this answer. They who want peace with me will give me what I desire. I am sick of ultimatums. I will have no more of them. My part is taken.
Frederick the Great

The War of the Austrian Succession, also known as the War of Jenkins' Ear and the first two Silesian Wars, was waged from 1740-1748 over a combination of Central European rivalries and colonial competition between Great Britain and France. Emperor Charles VI died without male issue. He was succeeded by Maria Theresa, who claimed the throne based on the Pragmatic Sanction (pragmatic sanctions were temporary amendments to the constitution of the Holy Roman Empire enacted by Imperial decree; in this case it was a temporary alteration in the succession laws) which her father had proclaimed note it's often assumed to have been made specifically for her; actually, it was made four years before her birth. Recognition of the Sanction was bought by The Emperor from the states of Europe at high cost in concession.

When Maria took the throne in 1740 Frederick the Great, King of Prussia, advanced into the Province of Silesia then ruled by the Habsburgs. Eager for a share of the Plunder, several of the states of Europe joined him, leading some of Austria's allies-particularly Britain-to declare war to maintain the status quo. This marked the beginning of a continent-wide war.

The war lasted until 1748 through many convoluted twists and turns, the war spreading to North America and India by way of Franco-British colonial skirmishing (the North American theatre is known in American history as "King George's War" as a result). At the last it subsided through a lack of resources. Frederick ended up gaining Silesia and establishing Prussia as a respected power, at the cost of continuing enmity from the Habsburg throne. The War also saw the last time a British monarch would personally lead their troops in battle, at Dettingen 1743 (although British royals have taken part in combat as recently as The War on Terror). In the meantime, the struggle between Great Britain and France remained undecided. This led to the Seven Years' War.