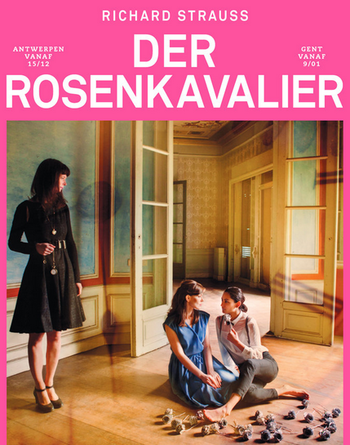 Richard Strauss' fifth opera, and arguably his most famous and successful. After the very modern Salome and Elektra, Strauss and librettist Hugo von Hoffmannsthal went with a more genteel work, one set in Vienna of the 18th century. Besides the Mozartean setting, two of the main characters could have stepped right out of The Marriage of Figaro: Maria Theresa (the Marschallin) and Octavian.
Advertisement:

The Marschallin, a noblewoman in her early thirties, is engaging in an affair with Octavian, a boy of seventeen. She is fully aware that their relationship is doomed: he is sure to find someone closer to his age, and the Marschallin will be forgotten. The lovers are interrupted by the vulgar Baron Ochs, who has come to Vienna to marry a much younger woman, Sophie von Faninal, primarily for her father's money. He needs a young man to act as the eponymous "rose cavalier" in order to be properly engaged. The Marschallin suggests Octavian for the role.

At the nouveau riche Faninal household, Octavian's arrival as the rose cavalier is spectacular, and Sophie is overwhelmed. Left alone for a few minutes, the two young people get acquainted and discover they have good chemistry. Ochs's arrival disgusts both Octavian and Sophie, particularly as the Baron treats her as an attractive piece of meat. Incensed, Octavian challenges the Baron to a duel and wounds him slightly. The Baron howls with pain, but his spirits improve when he arranges a secret liaison with a beautiful girl, who he doesn't know is Octavian in disguise.

At a rustic inn, the Baron's attempted seduction goes poorly, as a whole host of people he has insulted and annoyed take their revenge by scaring him, pretending he is already married with a host of children, and finally exposing him as the fraud he is to his would-be father-in-law, Faninal. The Marschallin arrives, sorts everything out, dismisses the Baron, and, with sadness, encourages Octavian to go off with Sophie.

This opera provides examples of: