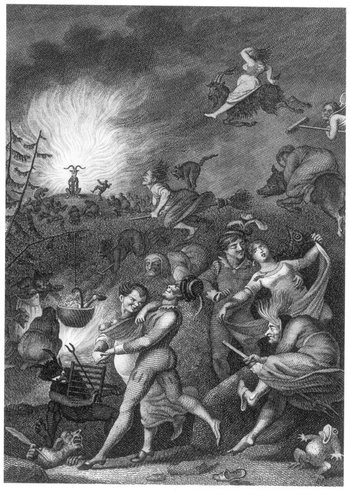 Walpurgisnacht by Johann Heinrich Ramberg.
"Walpurgisnacht" is from German, translating literally as "Oh fuck me, run!" Walpurgis Night is a gathering of witches that occurs six months after Halloween, so a witch named after a gathering of witches sounds like pretty bad news. It'd be kinda like playing basketball against a guy named Mr. NBA.
— SF Debris, reviewing Puella Magi Madoka Magica
Advertisement:

Walpurgisnacht, or Walpurgis Night or Hexennacht, was originally the German festival of Saint Walpurga, an 8th-century abbess responsible for converting a lot of pagans to Christianity. Despite the origin of the name, it has become a festival more associated with Paganism and, more specifically, Satanism. Most of the Pagan religions that celebrate Walpurgisnacht either have origins in Europe (e.g. Norse or Irish) or are eclectic religions (e.g. Wicca).

The Norse holiday that takes place on 30 April is called "Walpurgisnacht" or "May Eve." It's a summer-celebrating festival in Scandinavia. In every Germanic country, May Eve is seen as a time when witches are particularly active, but — being a celebration of summer as well — it is sometimes also seen as equivalent to Valentine's Day, where young couples celebrate their love. Many modern Heathens consider Freya to hold dominion over this festival, as she is a goddess of both witchcraft and love.

The LeVayan branch of Satanism adopted Walpurgisnacht as one of their major holidays along with Halloween. It officially begins on April 30 and can stretch to May 1, which is also known as Beltane. Wiccans and Satanists celebrate both Walpurgisnacht and Beltane, but not all Pagans do.

Note that April 30 is "Walpurgisnacht," "Walpurgis Night," or "May Eve," whereas May 1 is "Beltane," "Floralia", "May Day," or "Labor Day / International Workers' Day." They are separate celebrations a la Christmas and Christmas Eve and are not necessarily honoring or marking the same thing.

In media, when Walpurgisnacht is mentioned, it's usually being set up as the focus for some big occult event to happen at that time, regardless if it has any connection to the actual traditions of the holiday. People and things named after Walpurgisnacht often have demonic or witch-related associations. This drops it firmly into the category of Names to Run Away from Really Fast.

In many cases, this is the vernal counterpart of All Hallows' Eve. The trope for significant supernatural events taking place during Walpurgisnacht or Beltane is Horror Doesn't Settle for Simple Tuesday.