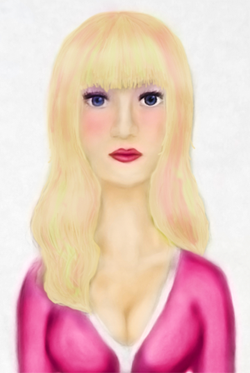 C'ren Amethyst Le Heart-Bieber, official artwork
"[AN: I donut own this spongebob thiny. dis is just a fanfic OK!]"
—Opening to One Less Lonely Gurl
Advertisement:

One Less Lonely Gurl by Monica Gilbey-Bieber is an infamous Spongebob Squarepants trollfic.

C'ren Amethyst Le Heart-Bieber is an 18-year-old marine biologist who was tasked to gather some specimen of coral reef on an ordinary day, and when she dove into the waters, she found an exceptionally huge coral reef that actually contains a portal to the world of SpongeBob SquarePants, where the characters have actually been turned into humans.

The plot centers more around Justin Bieber than SpongeBob himself. C'ren is then revealed to be a crazy, delusional person with plans to rule the world and have Justin to herself forever, using her discovery of this new universe as a front for her plan by injecting mind-control serum into all the patties and destroying all rival food sources, leaving everyone with no choice but to eat the infected patties. Aside from that, she wants to avenge herself from a past of abuse.

This fic has been said to be the preppy equivalent of My Immortal because of their similarities, including a Justin Bieber concert, horrible grammar and spelling, Canon Defilement, rude author's notes, and music genre bashing.

with commentary from the author himself. Also, a full version can be found here

, reposted by the author himself.

Now has a remake.

And a (so far incomplete) dramatic reading

Compare Da Ivy Cuvrd Wals of Higwsrts, which reads like the Harry Potter version of this fanfic, but has a worse plot and grammar. Compare and contrast Plankton's Eye View, which is another fanfic by the same author, and My Immortal.