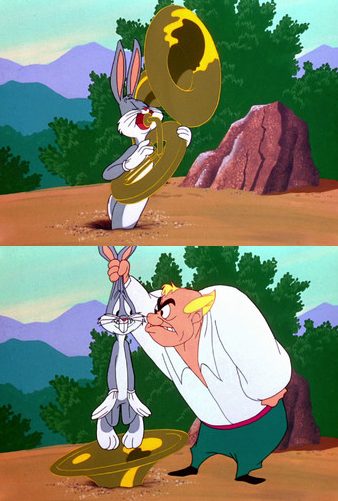 Of course you know, This Means War!
Advertisement:

Sometimes, someone is singing or playing a musical instrument or a drum — not to be malicious or anything — and he just WILL. NOT. SHUT. UP, until it finally makes another character yell for him to stop or just start screaming insanely, or lash out in some way. It doesn't necessarily have to be bad music (though it often is), it's just that it's incessant (or sometimes just in a style the hearer just can't stand to hear) and goes beyond the hearer's point of enduring, and to him it becomes like Nails on a Blackboard and he just wants it to end. The "madness" is usually figurative and temporary, but can occasionally be literal and permanent.

Related to Big "SHUT UP!", which is often the outcome. Also related to Dreadful Musician. Can be related to It Won't Turn Off. Could be a case of The Thing That Would Not Leave if this happens inside a person's house. Compare Brown Note, which is a related trope. (The difference? This trope is when the music is not harmful itself but irritates you to madness; Brown Note is when the music is inherently harmful.) Also compare Loud of War, which is this trope done maliciously. Also compare Hell Is That Noise. Not to be confused with Ear Worm, although it could be caused by one. Make it so only one character (or a few) can hear the music, and it becomes a form of Terrible Ticking.

Having been bothered by the jellyfish all night, Squidward plays his clarinet, which angers them.

Having been bothered by the jellyfish all night, Squidward plays his clarinet, which angers them.