Left the Background Music On 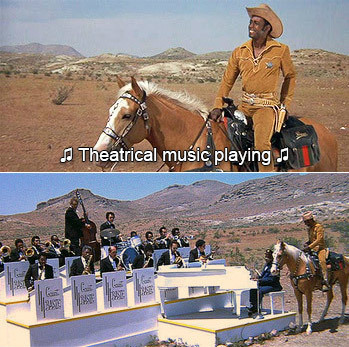 Sorry guys, can we do it again from the top?
"Well, I just did a ton of research at the library, but I couldn't concentrate — they were blasting Oingo Boingo at top volume."
— Stan Smith, American Dad!
Advertisement:

Meta-joke wherein the background music builds to a dramatic pace, and one of the characters suddenly turns around and complains about the loud music — revealing that what you thought was part of the soundtrack was music actually playing in the show. Bonus points if a second character apologetically turns the music off. A humorous variation of Source Music (which is any instance where the music the audience hears is actually in the scene).

Compare Diegetic Soundtrack Usage, for when the show's theme tune is performed within the show. Compare Diegetic Visual Effects, its visual counterpart. Not related to Leave the Camera Running, where the camera is set in the same scene for a very long time even if nothing's happening. Contrast Medium Awareness, for when a character is actually hearing the soundtrack. Can be used with almost all Mood Motifs. The inversion is Diegetic Switch, when the music goes from in-universe to soundtrack. See also AM/FM Characterization.

The Timekeeper Plays Them Off

After the Stump Trio solves the mystery, saxophone music is played in the background where it's revealed the Timekeeper is playing it.

Alternative Title(s): Sorry I Left The BGM On

The Timekeeper Plays Them Off

After the Stump Trio solves the mystery, saxophone music is played in the background where it's revealed the Timekeeper is playing it.