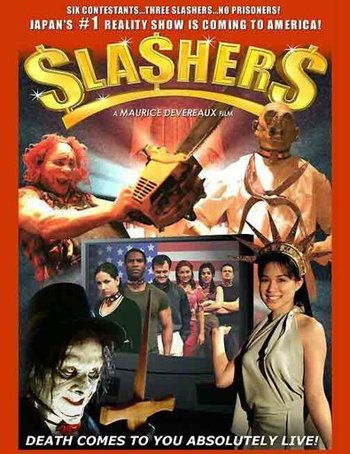 Slashers (スラッシャーズ Surasshāzu in Japan) is a 2001 horror film written and directed by Maurice Devereaux.

The Japanese TV reality game show Slashers pits six contestants against three costumed serial killers in a program that features actual deaths to the contestants as they flee the killers in a vast maze filled with obstacles. The last contestant alive wins a multi-million dollar jackpot. In this episode, the contestants are six Americans, including Megan (Sarah-Joslyn Crowder), who is using her appearance to protest the inhumanity of the program; Devon (Tony-Curtis Blondell), a former special ops soldier anxious for a big payday; and Brenda (Sofia de Medeiros), a beautiful model who doesn't know what she's gotten into until it's too late. The Slashers are Chainsaw Charlie (Neil Napier), a masked hillbilly with a chainsaw; Dr. Ripper (Christopher Piggins), a maniacal surgeon with oversized shears; and Preacherman (Napier), a Bible-thumping program rookie with a razor-sharp crucifix.