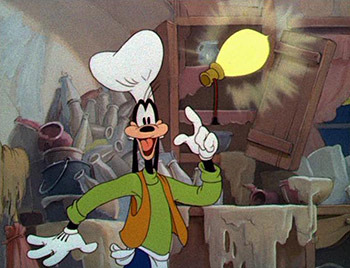 Dude, it's only a premise for a boob joke

A character thinks and thinks... then, suddenly, has a bright idea! A light bulb turns itself on directly above the character's head. Often with character pointing one index fingers upwards. Sometimes accompanied by an Idea Ding.

This trope has been subverted for decades — it became a cliche almost as soon as it was invented (in the 1920s, for the black and white Felix the Cat cartoons).

Often parodied. Most common subversions are the appearances of a broken light bulb to signify someone is thinking of a bad idea; candles, torches, or other sources of light appearing over the heads of characters who pre-date the lightbulb; and a character getting the bulb, but turning it off, indicating they had second thoughts and decided it wasn't a good idea after all. In shows with a weak fourth wall, characters may even grab the lightbulb off of their head and utilize it in their plan, or may happen to be standing under an actual lightbulb that is turned on by another character. Characters Genre Savvy enough will sometimes put an actual lightbulb above their head or someone else's in an effort to give them an idea. A Dead Horse Trope, definitely. Nearly every example here is a parody or subversion. Often used as part of a Rebus Bubble.

Also, this trope may have been invented in reference to a Mr. Thomas Edison having a great idea about something... what was it again?note Oh yes! The phonograph. The lightbulb? No, he didn't actually invent that one. (Or it could just be the concept of enlightenment. Or having a bright idea.)

The Drawn Together Movie

Yes, this clip IS taken entirely out of context.

The Drawn Together Movie

Yes, this clip IS taken entirely out of context.