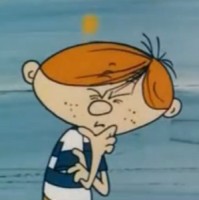 I've got this almost figured out...
Pomysłowy Dobromir (Inventive Dobromir) is a Polish children's series of 20 animated shorts, produced from 1973 to 1975.
Advertisement:

Every short follows a similar formula. Dobromir, a boy living in the country, sees his grandpa struggling with some back-breaking physical task. Dobromir, in a flash of inspiration, designs a mechanical tool which would automate the task. His animal friend, a smart but unintelligible bird, attempts to describe the invention to the grandfather, who only manages to grasp the concept when Dobromir brings in his newly-constructed tool for a demonstration of how it makes life easier.The series was written by Adam Słodowy, the Real Life Gadgeteer Genius from Polish TV, who ran his 'Do it yourself' show for years, majorly averting Doom It Yourself.

The series was continued in the years 1984-1988 with Pomysłowy Wnuczek (Inventive Grandson), based on the same concept. You'll find it, along with some more cartoons by the same studio, on the studio's official YouTube channel