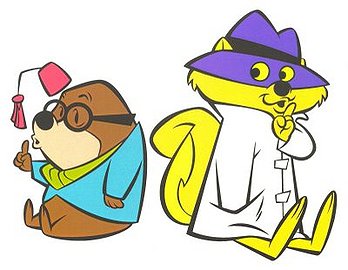 The 1965 versions of Morocco Mole and Secret Squirrel.
Advertisement:

Secret Squirrel is a series of Spy Fiction parody cartoon shorts made by Hanna-Barbera in 1965 as the lead segment of a Three Shorts series that also featured Squiddly Diddly and Winsome Witch. It was later revived in 1993 as Super Secret Secret Squirrel, in another Three Shorts format headlined by 2 Stupid Dogs. Secret Squirrel was voiced by Mel Blanc in the original version and Jess Harnell in the reboot. Paul Frees voiced Morocco Mole initially, while Jim Cummings handled the character's vocal duties in the 1990s remake, in both cases strongly reminiscent of Peter Lorre.

In both versions, Secret Squirrel is a Funny Animal spy. Along with his sidekick, Morocco Mole, He Fights Crime.

A Hanna-Barbera Beyond version of Secret Squirrel was a back-up strip in Scooby Apocalypse. 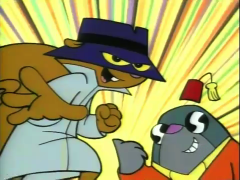 "Secret Squirrel?!" "In the flesh!" Specifically, the Super Secret version.