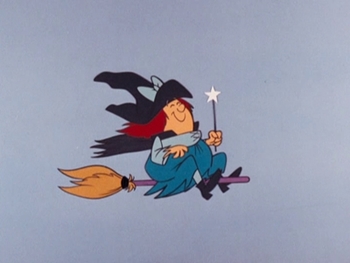 Winsome Witch is a character created by Hanna-Barbera for The Secret Squirrel Show, though she also sometimes appeared on The Atom Ant Show. The cartoon is a unique example of a Three Shorts Hanna-Barbera feature that stars a human instead of a Funny Animal, and the character is one of few such examples not to have a Sidekick. She was voiced by Jean Vander Pyl, best remembered for her work as Wilma Flintstone, as well as Rosie on The Jetsons.

Known as "Winnie" to friend and foe alike, she's chubby, middle-aged, and generally good-natured and friendly. Not surprisingly, her preferred method of transportation is a magic broom. On the Good Witch Versus Bad Witch scale, she definitely falls in the former category. Like Esmeralda or Aunt Clara from Bewitched, Winnie unfortunately has an incompetent streak, her spells backfiring more often than not. Her incantation catchphrase is "Ippity-pippity-pow!"

Ippity-pippity-pow! This cartoon provides examples of: