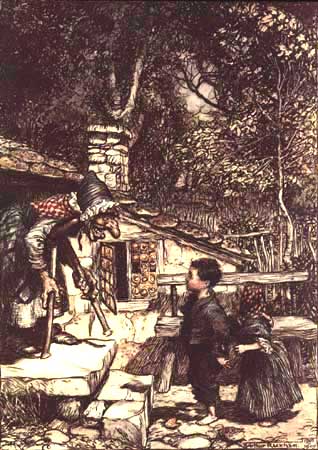 A Fairy Tale originally recorded by the The Brothers Grimm in 1812. It's in the Public Domain, so here goes:
Advertisement:

Once upon a time, there was a brother and sister named Hansel and Gretel. Their father was a widower who had remarried, and the family was having hard times. The stepmother insists they abandon the children in the woods so they will have more food for themselves. Their loving father is completely opposed to the plan initially, but she badgers him into agreeing. Hansel overhears the plan and comes up with the idea of leaving a trail of white pebbles. The plan works and the children are able to find their way back home. The stepmother accepts her plan's failure at first, but when food becomes even more scarce, she and the woodcutter attempt to abandon the children again, this time locking the children's door to prevent them from collecting pebbles. Therefore, Hansel is forced to mark their way back via a Trail of Bread Crumbs from the bread that was supposed to be their lunch; the birds eat all the crumbs, leaving them stranded.

They wander around for a while, and then they find a Gingerbread House. They are very hungry, so they start eating. The owner of the house, a Wicked Witch, calls out that she knows someone is eating her house; Hansel and Gretel don't reply. The third time, the witch goes out to meet them. She seems surprisingly friendly and gives them a huge feast.

The next day, Hansel is in a fattening pen, and Gretel is a servant. It seems that the witch eats children, once they are properly prepared. Hansel stalls for a while — the old witch can't see well and pinches his finger to test his plumpness and he is able to trick her by holding out a bone — but eventually she gets tired of waiting and decides to roast him and eat as he is, along with Gretel to compensate for the supposedly measly meal. She orders Gretel to crawl in to check the oven (intending, of course, to shove her in and cook her as well), but Gretel can tell what she has in mind, and pretends she doesn't know how. When the witch bends over to demonstrate it to her, Gretel shoves her in and slams the door.

The two siblings then take all of the treasures and valuables from the late witch's house and return home. With the stepmother now dead and all the valuables they took from the witch, Hansel and Gretel live prosperously with their father from then on. Found in many variants across many cultures; a list of some can be found here

There are television versions of this tale, but few film versions for reasons that should be clear.

The 19th century composer Engelbert Humperdinck adapted the fairy tale into an opera that premiered in 1893 and is still performed today. The opera in turn was adapted into a 1954 stop-motion animation film, and the 1987 live-action film from The Cannon Group is a loose take on it.

Garrison Keillor deconstructs this one, as well as "Snow White" and "Cinderella", in his short story "My Stepmother, Myself" in his book Happy To Be Here.

There's a modern retelling set in WWII Poland where Hansel and Gretel are Jewish children; and that's all we're going to say about that.

The Doctor Who Expanded Universe book Time Lord Fairy Tales retells it as "The Gingerbread Trap", crossing the plot over with that of the Tenth Doctor story "School Reunion".

when people were driven to desperate measures. Children were abandoned to fend for themselves, and there were many reported incidents of cannibalism.

A variant appears in the Dark Parables games, in which Hansel must rescue Gretel from the witch, rather than the other way around, and does so by giving her a permanent sleeping potion instead of shoving her in the oven. He aids a goddess in the process of the rescue, and she rewards him by bestowing an unusual blessing on his descendants in perpetuity. Gerda, from The Snow Queen, is one of these descendants.

A translation can be found here

Adaptions and works based upon "Hansel and Gretel":

"Hansel and Gretel" provides examples of: