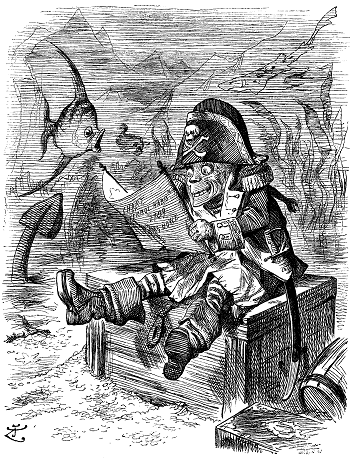 "Like a devil's tattoo from Death's drum! Fi! Fo! Fum! These be very parlous times for old legends of the sea. Vanderdecken is taboo'd, the Sea Sarpint is pooh-pooh'd, but 'tis plain as any pikestaff they can't disestablish Me!"
— Davy Jones, Punch! (Vol. 103, December 10, 1892)
Advertisement:

If he's not the most prestigious face of Western Nautical Folklore, Davy Jonesnote Alternatively Davie Jones, Davey Jones, and Old Davy is giving the other entrants a run for their money. His character is fluid, but always a powerful ocean entity best to be avoided, notwithstanding the occasional Adaptational Heroism that's inevitable with over 300 years worth of material. He's primarily known from the idiom "Davy Jones' locker", which refers to Hell or the ocean floor as a final resting place for ships and sailors.

Because Jones is a folkloric invention and by people who spend most of their lives away on a boat, it's uncertain when and how he came to be. The earliest known mention of him and his locker, at that time an established term, is in Four Years Voyages of Capt. George Roberts from 1726. As for Davy's origins, the leading theory regarding "Jones" is that it's based on the Biblical Jonah. "Davy" is of less certain origin, with the three primary suggestions being "duffy" ("duppy"; "evil spirit"), "devil", and Saint David of Wales. Another theory is that Davy Jones is named after someone. Traditionally, he resides on the bottom of the ocean, specifically at the Equator. A ship that passes the line is likely to catch his attention and be visited.

A sailor's locker is the place where their personal possessions are stored during their travels. Davy Jones's locker, therefore, is where he stores wrecks, corpses (mostly just the bones), and souls. On occasion, this is switched up with the locker being an actual locker Davy sits on as on a throne or the locker is the name given to his residence, be it a wreck or, again, an actual locker.

A Sub-Trope of Nautical Folklore, Satanic Archetype, Lord of the Ocean, and Ghost Pirate. See also Flying Dutchman. Not to be confused with the musician Davy Jones or David Bowie, officially David Jones, who took a stage name to avoid confusion with the other musician.