The Dead Have Eyes 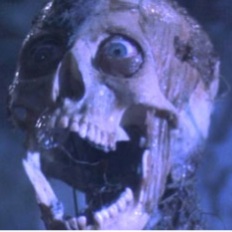 What beautiful blue eyes! And just look at those pearly white teeth!... not too closely, though.
Guybrush: How can you see without eyeballs?
Murray: How can you walk around without a brain? Some things no one can answer.
— The Curse of Monkey Island
Advertisement:

This manifests in different ways in different media. Decades old zombies fresh out of their graves will have gorgeous (or more likely horrifying) functional eyes despite the rest of their body being a decayed mess. On the other extreme, lacking sensory organs is no impediment for animated skeletons, who will be able to see and hear humans as if they still had those fleshy bits. At times, they will have Glowing Eyelights of Undeath in their eyesockets.

Think about it. A newly risen zombie, magically animated skeleton or mummy should be no more able to see victims than a bat... okay, bad example. There is a good reason behind this though: who would be afraid of a blind and deaf zombie? Then again, there are plenty of other problems with the undead bio... UnBiology, anyone?

Interestingly, the undead may even develop Super Senses in the form of superior smell, hearing, or even "living radar". The skeleton/zombie with still-intact eyes is probably a modern trope. Historically, this may have to do with the Special Effects and makeup needed for eyeless sockets being difficult or impractical to use, since it would potentially blind the actor and remove some of their ability to emote.note  (well, emoting that they don't emote, anyway) As modern horror movies and CGI have blurred the line between rotting zombie and skeleton with bits of flesh and organs still hanging on, for increased Squick factor, there are now those that toe the line between "recently deceased zombies (with functioning eyes)" and "older stop motion polished skeletons (without)".