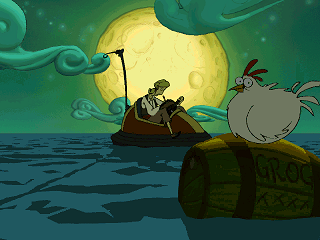 Look, chicken!
"Lost at sea for days now. I have no crew and no navigational instruments, no provisions except a half-eaten corn dog, and unless I find water soon, I'm surely done for."
— From the Captain's Log of Guybrush Threepwood, The Curse of Monkey Island
Advertisement:

A character or characters finds themselves adrift on the ocean without a means of getting to shore and little to no food or drinkable water. Usually, this is the result of a storm at sea, and if the characters in question are lucky they'll be in a lifeboat. If not they'll be floating on a piece of driftwood with nothing except the clothes on their back.

One or more of the characters may start hallucinating or acting crazy, or the survivors may start to argue over the remaining supplies while they wait to be rescued or manage to find land. If things get really bad, Cold Equation or No Party Like a Donner Party may come into play.

Often happens in stories about Wooden Ships and Iron Men. May lead to being marooned on a "Far Side" Island.