Literature / Across a Jade Sea 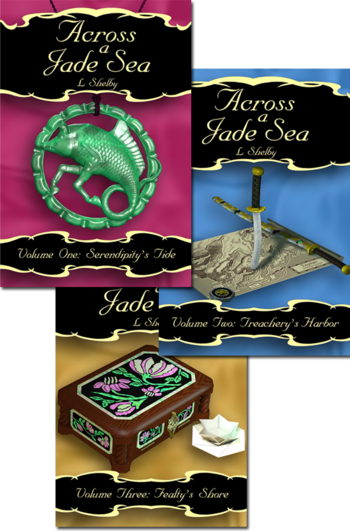 "Moon-eyed is when you invent a character for someone so that you can dream silly dreams about a perfect future with him. If I say you are the sort of man who refuses to burden others with his troubles, who will always treat me with respect and courtesy even when your are exhausted or in pain, who listens to my ideas, who won't abandon me when things get rough, and who will give up even his own needs in order to see to mine- what part of that did I invent?"
—Batiya
Advertisement:

Batiya is working on an ocean liner as an apprentice engineer, when she helps rescue some foreigners stranded in a lifeboat. Among them is Chunru Dachahl Pralahnru, a mysterious man on a diplomatic mission to Xercalis from the Changali empire. But the men that originally sunk his ship are not willing to leave it at that, and attack the ship that rescued him. Batiya finds herself castaway at sea in a lifeboat with the stranger who's life she just saved.

As the two of them face death rescuing each other from pirates and assassins, Batiya finds herself falling for Chunru, even though she doesn't know much about his personal life. He too has romantic feelings towards her, but this has an unfortunate side effect of making Batiya a target too.

Across a Jade Sea is a trilogy of adventure romance novels, set in an original world without magic. Books in the series include: