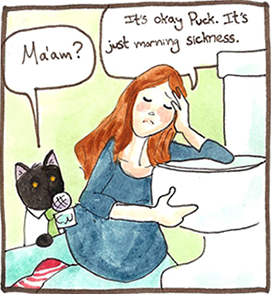 "Ma'am? Come along, ma'am. Let's get you to a nice, clean carpet."
Beezus: And twice, back around Thanksgiving, Mother threw up after breakfast.
Ramona: That's nothing, I've thrown up heaps of times, and mince pie always makes me want to urp.
Beezus: But ladies who are going to have babies sometimes throw up in the morning.
Ramona: They do?
— Ramona Forever (Ramona Quimby series)
Advertisement:

A surefire way to detect pregnancy is puking in the morning, more efficient even than missing a period.

Never mind the fact that in Real Life, pregnant women may or may not get intense nausea which may or may not lead to vomiting which can happen at any time of the day (though The Other Wiki

says that morning sickness is most common in the morning — not because it's a special time of day but because the nausea feels worst on an empty stomach). Of course the latter part isn't always used, pregnant women in fiction will often vomit at some random part of the day, often causing another character (often male) to comment, "Why do they call it 'morning sickness' if it happens any time of the day?"

Sometimes even animal characters will get morning sickness, despite it mostly being a human thing.

Because morning sickness is used so often as a tell for pregnancy, and because vomiting for other reasons tends not to come up as often in fiction, this causes expectations in the audience any time a female character is seen throwing up. If said character then goes on to speculate that the nausea must be stomach flu or food poisoning, that's as good as holding up a positive pregnancy test as far as most works of fiction are concerned. As a result, having the true cause of nausea be a surprise to the audience can be difficult to pull off. In some cases, Pregnancy Faint is used as it is a less common example of a tell for pregnancy.

Particularly egregious if it happens hours or days after the pregnancy is supposed to have been conceived — not only should no sign of pregnancy be detectable for over a week, but morning sickness should take about a month at least to manifest.

Somewhat justified in the case of a Mister Seahorse situation, because there's (usually) no missed period for him to tip him off before the nausea begins. (However, it's not usually justified in that situation for pregnancy to be the first guess when he starts feeling nauseous and/or vomiting.)

Carole's pregnancy is becoming more and more obvious, although she's still too scared to tell Mr. Brittas about it.

Example of:
My Secret Pregnancy

Carole's pregnancy is becoming more and more obvious, although she's still too scared to tell Mr. Brittas about it.