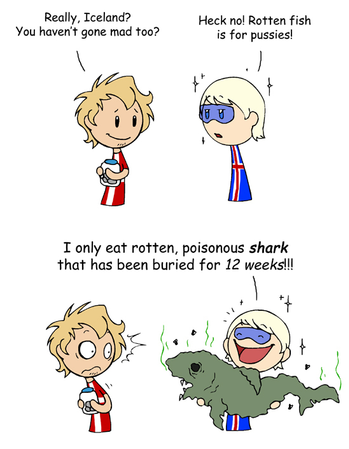 If Denmark wasn't green around the gills before...
Connor Macleod: You look like a woman, you stupid haggis!
Ramirez: Haggis? What is haggis?
Macleod: Sheep's stomach, stuffed with meat and barley!
Ramirez: ... And what do you do with it?
Macleod: Heh! You eat it!
Ramirez: [bridling] How revolting!
— Highlander
Advertisement:

The planet Earth is a very diverse place, with many different cultures, each of which has its own traditions, history, worldview, and menu. For the hapless traveler, encountering a new and very different food can be an unsettling experience of the Squick-tastic variety. This is very much Truth in Television and often finds its way into fiction as well, where it is usually played for laughs. Plus, it's an easy challenge for a Reality Show to pull off. For example, referenced in the page image is Hákarl, fermented shark buried in the ground for 6-12 weeks then cut into strips and hung to dry for several months. It's a true delicacy in Iceland.

One common variant of this gag is for a person to enjoy the food at first but get Squicked out when he asks what it is.

Foods like this may taste like feet and may appear as a Masochist's Meal, or more rarely, be considered tasty by a character, especially a Big Eater. Contrast with I Ate WHAT?!, when a person ingests something and then learns what it was. Note that most Foreign Queasine is automatically Stock "Yuck!" material. Occasionally combined with Dinner Order Flub. If an animal which the diner's culture considers too gross to eat is consumed out of sheer desperation, rather than because it's acceptable fare among foreigners, that's Reduced to Ratburgers.

No Real Life Examples, Please! There may be Values Dissonance, and taste is subjective.

Toothpick has a taste for lollipops shipped fresh from Cuba. Apparently they taste like rice and beans.

Toothpick has a taste for lollipops shipped fresh from Cuba. Apparently they taste like rice and beans.