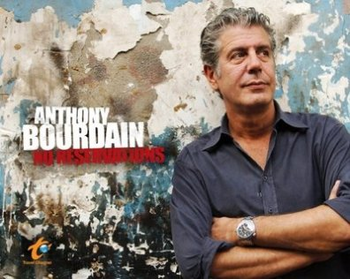 Once upon a time, a hard talking, chain smoking chef who had worked his way through several failures to become a fairly respectable chef at a NYC French restaurant, Les Halles, wrote a tell-all book: Kitchen Confidential: Adventures in the Culinary Underbelly (2000). To his and everyone else's surprise, it became a hit sensation. (It even spawned the short-lived Kitchen Confidential series).

Deciding the writer's life might be worth continuing on given the seemingly inevitable burnout of working 12 hour shifts in the busy kitchen, he conceives of another book, a travelogue in which he visits different places around the world in search of "the perfect meal". To his surprise and horror, the Food Network — an institution he was an outspoken critic of — got wind of the idea and wanted to make it into a television show. The book and the show became A Cook's Tour and Anthony Bourdain became a television host.

The show ran 35 episodes and attained something akin to cult hit status. The book chronicles several pages of behind the scenes instances of "why you should never do a TV show" — many of which owe a lot to Anthony Bourdain's don't-want-to-put-up-with-this-shit and tell-it-like-it-is demeanor which account partly for his appeal. However, according to his newer book "The Nasty Bits", the Food Network was not going to renew the show because they want more shows that cater to average folks with barbecues and limited interest in foreign cuisines. After being abandoned by their own production company, the Travel Channel (which would give him a lot more free rein and creative control) picked up the show and it became No Reservations.

Anthony Bourdain: No Reservations (2005-2012), which concluded after 8 seasons, works on the premise of using food as a window into the culture that they are visiting. "In the world of a cook," says the show's promo blurb, "an understanding and appreciation of how others eat is akin to discovering secret societies and cryptic subcultures. Cooks have special access. As always, the food is only the first glimpse of a wider view of how people live their lives in faraway lands and unfamiliar territories." The show has a number of defining characteristics that lend to its popularity. Anthony Bourdain's ever present snark and hard honesty are one. His willingness to eat many things Westerners might not — a beating cobra's heart in Vietnam back on A Cook's Tour, raw bloody seal with an Inuit family on the kitchen floor in Canada, assorted tasty offal ("the nasty bits" he lovingly calls them) and the like are another. His tendency to end up in humiliating situations — they may or may not involve significant quantities of alcohol — in which Hilarity Ensues is another.

In June 2012, Anthony announced via his Tumblr that No Reservations was ending its run after 8 seasons and he would be moving with his production team to CNN. Considering that the parent company of Food Network (which Anthony despised) recently purchased Travel Channel, the new development wasn't exactly surprising. The new show, Anthony Bourdain: Parts Unknown, kept with the format of the old fairly closely with a greater emphasis on current event topics.