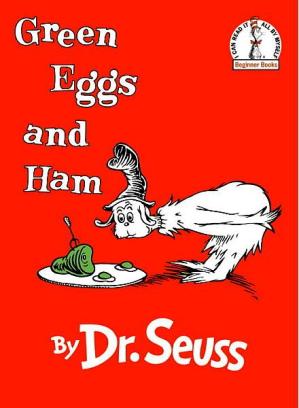 Dr. Seuss does it again, putting a tiny collection of words to amazing use. He manages this with a text composed primarily of repetitions of the same few lines, with a few minor changes, building up to a climactic ending. His whimsical pictures showcase the crazy world in which this storyline is possible.

This 1960 book was written as the result of a friendly bet: Seuss's publisher was impressed that The Cat in the Hat was written using fewer than 300 different words, and bet Seuss that he couldn't write another one with a coherent plot using only 50 different words. Seuss hit it right on target.

The story follows a nutty, but persistent character named Sam-I-Am, who hangs around a tall grumpy, unnamed, dog-face man. Throughout the book, Sam pursues the man around, asking him if he would like to eat the eponymous foodstuff? No? How about this way, or that way...? His increasingly exasperated victim denies his offer each time, until finally he gives in just so that Sam will leave him alone...

...and given that this is the Trope Namer for I Do Not Like Green Eggs and Ham, he likes it.

For such a simple book, it's received a surprising number of adaptations: the first was as a segment in Dr. Seuss on the Loose,note retitled Green Eggs and Ham and Other Stories on home video an animated package film TV special hosted by The Cat In The Hat (the second and final time he would be voiced by Allan Sherman) which also adapted The Sneeches and The Zax. It's had two musical adaptations, first as Funk/Rap Rock song by Canadian band Moxy Früvous and another by "Weird Al" Yankovic as a parody of U2's "Numb" which he'd occasionally perform in concert (due to push back from the Seuss estate, he's never recorded a studio version). Tangentially, it inspired the title of the beginner snare drum solo, Green Eggs and Flam. It also has a Living Books adaptation.

In 2019, it received a second animated adaptation in the form of a Netflix series starring Adam Devine and Michael Douglas.

The original book(s) contain examples of:

The animated short contains examples of: