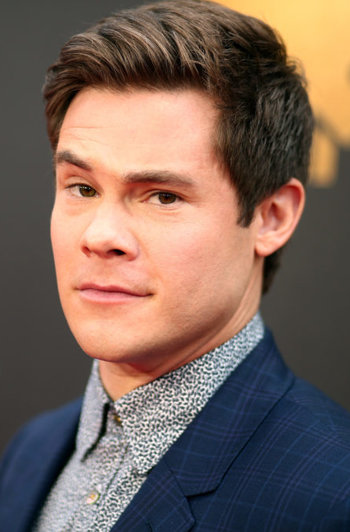 "Adam's hysterical! Such a sweetheart. I love him so much; just always want to pinch his cheeks. He always makes me laugh."
— Sarah Hyland
Advertisement:

He began his career making Youtube videos with his friends Anders Holm, Blake Anderson and Kyle Newacheck in the early 2000s, which caught the attention of Comedy Central. They wanted the group to make a show, and thus Workaholics was born. They wrote, produced, directed and starred in the show for 7 seasons, ending as Comedy Central's most successful show.

Following season 1, he was approached by Elizabeth Banks to audition for an a cappella movie Pitch Perfect. The film was hugely successful, and his character Bumper was so popular, that it spawned a sequel, with him reprising his role. This led to him being typecast in Magnificent Bastard roles, in films such as The Final Girls, Mike and Dave Need Wedding Dates and Game Over, Man!.

In 2013, Adam began playing a recurring character, Andy, on Modern Family. He impressed the producers so much that they wrote him into subsequent seasons. Due to his incredible performance portraying a nice, sweet love interest, he started to get offers to play Boy Next Door characters, beginning with the 2015 comedy/drama The Intern. From there, he was the lead in the romantic-comedies When We First Met and Isn't It Romantic, showcasing his dramatic chops. This was further established in his performances in the satirical dark comedy The Righteous Gemstones (2019), raunchy romantic comedy Jexi (2019) and animated children’s series Green Eggs and Ham (2019).

Unbeknownst to some of the public, Adam is also an extremely accomplished stand-up comedian, having competed in the prestigious Montreal Comedy Festival, when he was just 22.

Not to be confused with Adam Levine.

Tropes associated with his works and career: