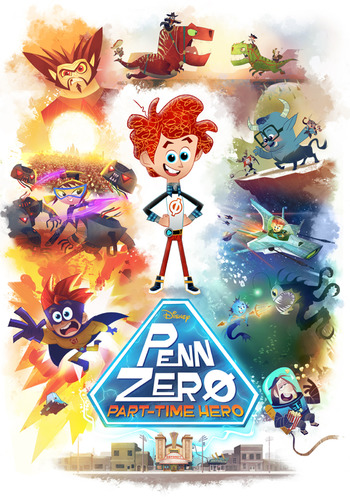 Zap In. Save the World. Repeat.
"Wherever good is threatened, heroes rise to the challenge and always save the day!
...Except when they don't. And that's when I go to work."
— Opening Narration
Advertisement:

When his parents get stuck in an alternate dimension called The Most Dangerous World Imaginable, suburban teenager Penn Zero learns a few things. First, that his parents don't sell life insurance, but are actually "part-time heroes" who travel to other worlds to save the day when that world's heroes aren't able to accomplish the task, thus keeping the multiverse in balance. Second, he has inherited their job while they're gone and will now be going on missions with his friends Sashi Kobayashi and Boone Wiseman. And third, he'll be facing off against "part-time villain" Rippen and his minion Larry every step of the way, who just so happen to be his art teacher and school principal, respectively.

The inspiration for the show is a combination of the two creators' childhoods. Levine's father worked in a New York City movie theater, while Bush thought his father was a generic government worker, only to be told one day in his teens that he was actually a field agent for the CIA, as was his grandfather. The concept was developed during a lunch break and later pitched to Disney Television Animation.

The series premiered with a Christmas episode on December 5, 2014, with the show beginning its regular run on February 13, 2015. On July 16th, 2016, it was announced that the second season will also be the last

, with said season premiering on July 10th, 2017 and concluding two weeks later with the one-hour Grand Finale "At the End of the Worlds".

Most of the show's staff went on to Tangled: The Series and Big Hero 6: The Series.