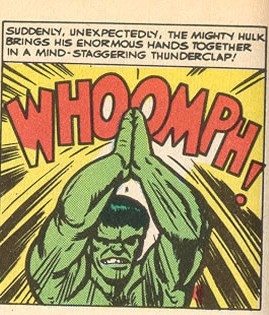 Clap your hands if you believe.
Superman had smashed his great hands together in an impact that almost deafened the New Gods who hovered too near to him. The shockwave from the crash buffeted a flying legion of Para-Demons.
— Hellsister Trilogy
Advertisement:

Clapping is pretty loud, but it pales in comparison to the Shockwave Clap. Sometimes it's just a really loud clap and sometimes it has the power to knock people over or cause physical damage. It can have more intuitive uses from time to time, such as blowing out fires.

This is commonly used by characters with Super Strength, since it lets them demonstrate their power without directly attacking someone (which could have messy results). Usually appears in the form of a powerful, high-pressure wave of air.

The "realistic" varieties of Sword Beam create a similar effect, but concentrated into a sharp edge. However, these are usually associated with skill rather than strength.

See also Kung-Fu Sonic Boom, Make Me Wanna Shout, and Shockwave Stomp. Not to be confused with Clap Your Hands If You Believe.

Channeling the power of Sekhmet, Pharaoh is strong enough to create a shockwave with the clap of his hands.

Channeling the power of Sekhmet, Pharaoh is strong enough to create a shockwave with the clap of his hands.