Comic Book / Fall of the Hulks 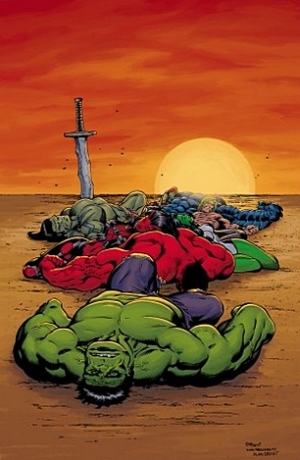 A Hulk family event detailing the plot of the supervillain cabal the Intelligencia, a team of Mad Scientists, to kidnap the eight smartest people in the Marvel Universe, and the reaction of the various Hulks and supporting characters.

Bruce Banner has teamed up with the Red Hulk in order to stop the Intelligencia from kidnapping the eight smartest people in the world (including Reed Richards, Doctor Doom, T'Challa, Hank Pym, and Hank McCoy).

Bruce is also training Skaar, the son of the Hulk, in order to make him seem like a hero, but also to train him to kill the Hulk when he eventually reemerges. To this end, he arranges several fights between Skaar and the Juggernaut, as well as Daken, the son of Wolverine.

In the end, Bruce assembles a team to take out the Intelligencia and rescue the eight smartest people (as well as his recently resurrected wife Betty Ross Banner) including Korg, A-Bomb (Rick Jones), Namor, Spider-Man, Wolverine, and Amadeus Cho. Unfortunately, his plan doesn't work and he's the final one caught by the Leader and the Intelligencia as they use the Red Hulk's gamma energy to make all the heroes "Hulked-out" and release Hulked-out soldiers to take control of Washington. The Hulks have fallen.

Fall of the Hulks provides examples of: