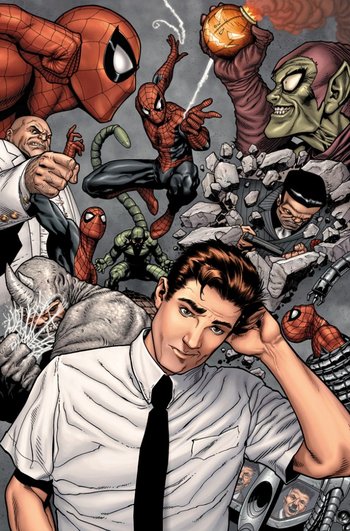 He might make great music, but Sting's got nothing on this Parker kid.
Advertisement:

Brand New Day is a long chapter in Spider-Man's life that followed One More Day and covered The Amazing Spider-Man from #546 to #647, as well as all Spider-Man-related comics, published during that time period. Two most characteristic elements of it were the "Spidey-Braintrust" team of multiple writers (who started with four and grew larger later) switching between each story with unusual issue frequency — three issues were published in one month, during the first three weeks of said month with other Spidey-related comics for fourth week.

It was followed by "Big Time", written entirely by Dan Slott with issues coming out twice a month. The Big Time era has gone on to either ignore/undo much of Brand New Day in favour of a different direction.

Not to be confused with the Sting album Brand New Day.