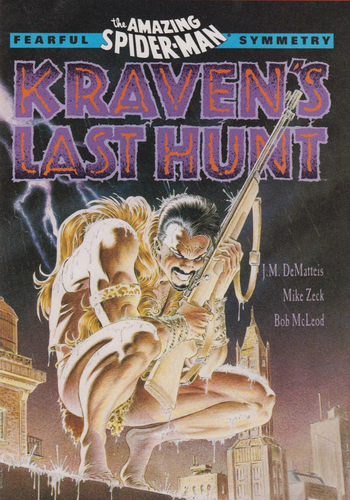 "I have slain the Spider. Become him. I have hunted as the Spider hunts... consumed the Spider's prey. I have proven myself his superior in every way."
Advertisement:

Kraven's Last Hunt, or Fearful Symmetry, is a 1987 crossover series between various Spider-Man titles regarding his last battle with Kraven the Hunter. It spans Web of Spider-Man #31-32, The Amazing Spider-Man #293-294 and The Spectacular Spider-Man #131-132. This is the first event title in Spider-Man's publication history, and the first time a single story carried across all the books.

Sergei Kravinoff, a.k.a. Kraven the Hunter, has been a major member of Spider-Man's rogues gallery for years. Originally invited to New York by his half-brother the Chameleon (the first supervillain Peter Parker fought), Kraven was soon introduced to the unique challenge of hunting Spider-Man. Since the '70s however, he'd diminished somewhat. This time, Kraven is setting out to truly prove himself to be superior to Spider-Man.