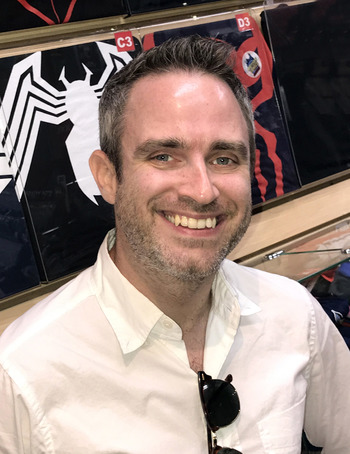 Nick Spencer is a comic book writer well known for his work at Marvel and on indie comics. His best known works include indie comics Morning Glories and The Fix and, for Marvel, Superior Foes of Spider-Man and his runs on Captain America (both Steve Rogers and Sam Wilson) and Spider-Man.

Before writing comics, Spencer worked in politics, running for Cincinnati City Council and later working in for a Democratic politician. After that, he moved to New York and finally was able to published his first comic book, Existence 2.0, at Image Comics. His first ongoing (non-mini-series) comic was Morning Glories, described as "Runaways meets Lost."

In 2016, he start writing the controversial Captain America: Steve Rogers, which culminated in the crossover Secret Empire. In 2018, he took over writing Spider-Man from Dan Slott (who had written the character for over ten years).