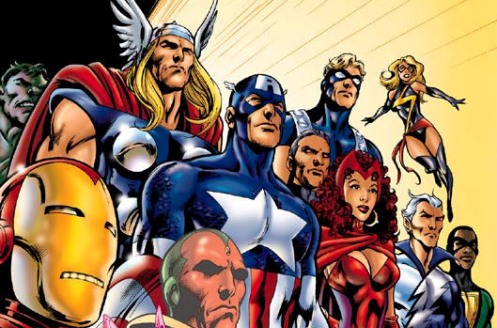 AVENGERS ASSEMBLE!note Pictured, left to right: Hulk, Iron Man, Thor, The Vision, Captain America, Wonder Man, Hank Pym, Scarlet Witch, Quicksilver, Carol Danvers as Ms. Marvel, and Triathlon. Not pictured: about a hundred other heroes.
"And there came a day, a day unlike any other, when Earth's mightiest heroes and heroines found themselves united against a common threat! On that day, the Avengers were born—to fight the foes no single super hero could withstand! Through the years, their roster has prospered, changing many times, but their glory has never been denied! Heed the call, then—for now, the Avengers Assemble!"

The Avengers have been adapted for other mediums multiple times; a complete list of which can be found on the Franchise page. The highest-profile and most influential version is the one that features in the Marvel Cinematic Universe, with several members getting their own films and a few others being supporting characters, and the MCU usually brings the entire team together in an Avengers movie at the climax of a multi-film story arc. The franchise's "Infinity Saga" revolves around a core team of Iron Man (Robert Downey Jr.), Captain America (Chris Evans), Thor (Chris Hemsworth), the Hulk (Mark Ruffalo), Black Widow (Scarlett Johansson), and Hawkeye (Jeremy Renner); and other team members include War Machine (Don Cheadle), The Falcon (Anthony Mackie), Scarlet Witch (Elizabeth Olsen), Quicksilver (Aaron Taylor-Johnson), The Vision (Paul Bettany), Ant-Man (Paul Rudd), The Winter Soldier (Sebastian Stan), Spider-Man (Tom Holland), Black Panther (Chadwick Boseman), and Doctor Strange (Benedict Cumberbatch). The core lineup for the next era has yet to be determined, as the team disbanded once the story arc ended and no new movie reuniting them has been announced yet.