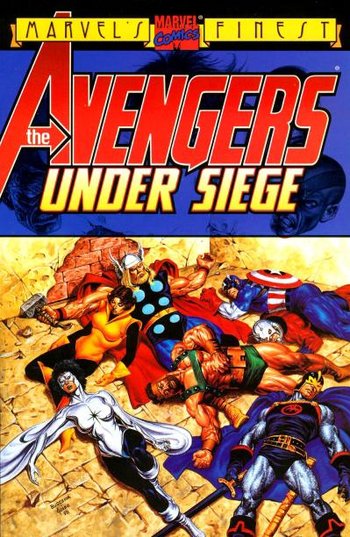 Wake up, Avengers! This is not the moment to take a rest!
Advertisement:

Under Siege is a 1980s storyline of The Avengers, by Roger Stern and John Buscema.

The story is basically "Die Hard" in the Avengers mansion. Zemo and the Masters of Evil monitor the activities of the Avengers, and overrun the mansion at a moment it was empty. They easily subdue most of the Avengers that enter it, unaware of the problem, and eventually flee when the remaining Avengers are aided by Thor.

This comic book has absolutely no relation with Under Siege of Steve Seagal, or with the comic book crossover Siege published in 2010.

This storyline has gone down as one of the most notable Avengers arcs, as it has been adapted in two animated series, both The Avengers: Earth's Mightiest Heroes! and Avengers Assemble.

Under Siege provides examples of: