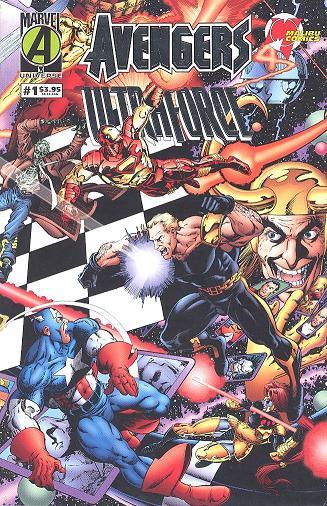 Avengers/Ultraforce is a two-parts crossover between The Avengers and Ultra Force.

Loki, living in the Ultraverse and owning the six Infinity Gems, is defied by the Grandmaster to play a game. If the Grandmaster wins, he would get the Mind gem that he formerly had. If Loki wins, the Grandmaster would reveal him the location of a 7º gem. They arrange a number of "Let's You and Him Fight" clashes between the Avengers and Ultraforce, and Loki won. The grandmaster introduced the 7º gem: Sersi. United with the others, the 7º gem left Sersi and became a living being with the others, Nemesis. Nemesis then erased all existence, to begin it again.

The new universe has composite versions of the characters from Marvel and Ultraverse, and a new Avengers origin story. When Topaz attacked Loki, all of it became a mess, and countless alternative Avengers and Ultras stated appearing to attack Nemesis. The Black Knight managed to defeat her with the Ebony sword, and the universes were restored.