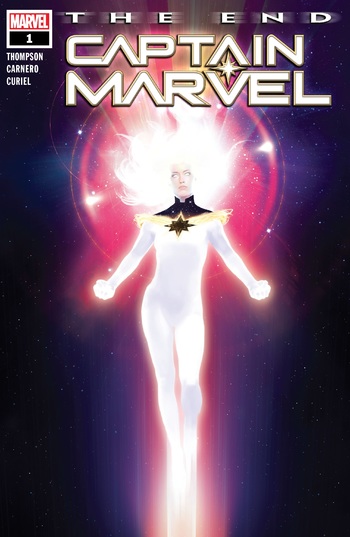 This is your last adventure, so shine, girl!
Advertisement:

Captain Marvel: The End is a 2020 comic book published by Marvel Comics, written by Kelly Thompson and drawn by Carmen Carnero, released under a banner of related one-shots called The End. It follows Captain Marvel (Carol Danvers) on her final adventure in a possible future of the Marvel Universe.

Set in the distant future, Captain Marvel returns to earth after 30 years living in another planet. She finds that earth has been destroyed and now there are only ruins. However, after searching a bit, she finds a group of survivors. She helps them to defeat a powerful sea monster, but that is not the real problem: the sun is dying. So she goes to space and restarts the sun, giving her life in the process.

Thompson's ongoing Captain Marvel title would later revisit this universe (officially dubbed Earth-20368) in a story arc titled The New World, wherein Carol is transported there and finds an opponent in Ove, son of Namor and The Enchantress.