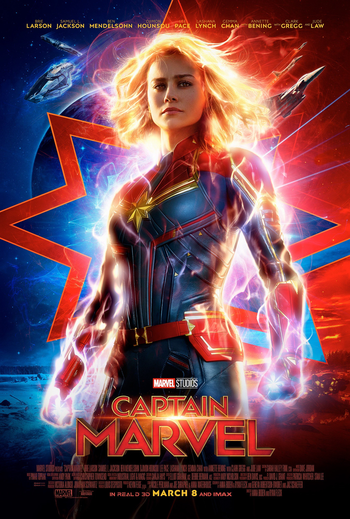 Discover what makes a hero.
"I'm coming to end it. The war, the lies, all of it."
— Carol Danvers / Captain Marvel
Advertisement:

Captain Marvel is a 2019 superhero film, the twenty-first film entry of the Marvel Cinematic Universe, and the ninth installment of Phase 3, based on the Marvel Comics character of the same name. It is directed by Anna Boden and Ryan Fleck (It's Kind of a Funny Story) and co-written by them and Geneva Robertson-Dworet (Tomb Raider). note With additional story credits from Nicole Perlman (Guardians of the Galaxy), Jac Schaeffer (Black Widow (2021)), Joe Schrapnel, Anna Waterhouse, Meg LeFauve (Inside Out), and Liz Flahive & Carly Mensch (GLOW), who were all involved with the project at various points in its development.

Set in 1995, the film centers on Vers (Brie Larson), who is introduced as a member of Starforce, an elite special-ops squad within the forces of the Kree, the militaristic alien race previously seen in Guardians of the Galaxy and Agents of S.H.I.E.L.D. In the course of a war between the Kree and the Skrulls, a race of shapeshifting aliens, she finds herself on Earth, and discovers that the Skrull leader Talos (Ben Mendelsohn) has set his sights on Earth for unknown reasons. But Talos isn't the only one who develops an interest in our planet, as Vers also finds out about her past as a human on Earth, when she was a pilot named Carol Danvers.

Also appearing in the film are Jude Law as Yon-Rogg, Carol's mentor and the commander of Starforce, Lashana Lynch as her human friend Maria Rambeau (mother of Monica Rambeau, portrayed by Akira Akbar), Gemma Chan as Minn-Erva, Algenis Perez Soto as Att-Lass, Rune Temte as Bron-Char, and Mckenna Grace as young Carol, as well as Annette Bening as a woman from Carol's memories. Returning actors include Samuel L. Jackson as Nick Fury and Clark Gregg as Agent Phil Coulson (reprising his role in the movies for the first time since The Avengers), while Lee Pace and Djimon Hounsou reprise their respective roles as Ronan the Accuser and Korath from Guardians of the Galaxy.

Not to be confused with the former Captain Marvel of DC Comics, who also got his own film in 2019, less than a month after Carol. It's a long story about trademarks.

A sequel was confirmed to be in development at 2019's San Diego Comic Con, and will release as part of the MCU's Phase Four. In August 2020, Nia DaCosta (Candyman, Little Woods) was announced as the director, replacing Boden and Fleck. The film, titled simply The Marvels, is slated to release on July 28, 2023, and will co-star Iman Vellani as Kamala Khan / Ms. Marvel and Teyonah Parris as a grown-up Monica Rambeau, who both previously made their MCU debuts in Ms. Marvel and WandaVision respectively.