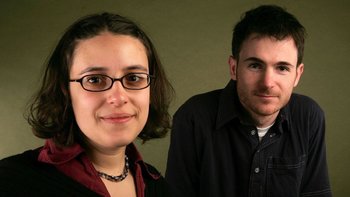 Anna Boden (born 1979) and Ryan K. Fleck (born September 20, 1976) are American directors, writers, and editors who frequently collaborate with one another.

Fleck is best known for directing the 2006 film Half Nelson, which garnered lead Ryan Gosling his first Oscar nomination for Best Actor. With creative partner Boden, the two have directed a number of films together, including It's Kind of a Funny Story (based on the Ned Vizzini novel of the same name) and Mississippi Grind. They're also directed television, including series such as Billions, The Affair, and Looking.

In 2018, it was announced they'd been chosen to direct Captain Marvel, based on the Marvel Comics character of the same name. The movie, set within the Marvel Cinematic Universe, was released in 2019. The two were also previously in contention to direct 2014's Guardians of the Galaxy, which ultimately went to James Gunn.