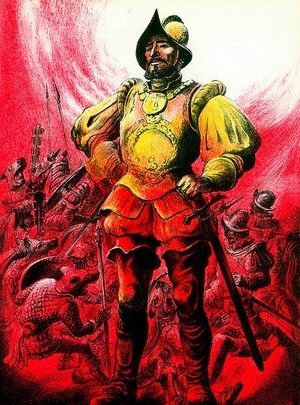 "They were no colonists; their administration was merely a squeeze, and nothing more, I suspect. They were conquerors, and for that you want only brute force—nothing to boast of, when you have it, since your strength is just an accident arising from the weakness of others. They grabbed what they could get for the sake of what was to be got. It was just robbery with violence, aggravated murder on a great scale, and men going at it blind—as is very proper for those who tackle a darkness. The conquest of the earth, which mostly means the taking it away from those who have a different complexion or slightly flatter noses than ourselves, is not a pretty thing when you look into it too much."
— Marlow, Heart of Darkness
Advertisement:

This is an imperialist or colonialist man who has just come to take advantage of the natives with a friendly smile and a rifle on his shoulder. He only cares about winning a quick buck at everyone else's expense and exploiting the poor natives since he is convinced his race/culture is superior. Since he is either rich and powerful or in the middle of nowhere where nobody can hear your screams, he becomes the king of the place. He is likely to be Chased by Angry Natives led by a Badass Native either when declaring such dominion or somewhere else along the line.

The character, usually a white one, was originally depicted as Western European (usually from Britain, Spain, France or Germany) but people from Eagleland joined the group later. If this is the case, expect some Social Darwinist White Man's Burden and A God Am I excuses for his actions (which usually consists of taking over a place, exploiting the natives and the land, selling them to his Human Traffickers, then leaving the place as an economic waste after the natives get fed up and kick him out). Two places you stand a good chance of seeing a non-white version of this trope are Chinese and Korean (both north and south, but mostly north) depictions of the Japanese, especially during the years of Japanese imperialism. Chinese communists may also be portrayed this way in western films about Tibet (which ironically pisses off the real-life communists to no end, Chinese or not ).

It's fairly common in works from Africa, India, Ireland, Latin America and China since those are places where Imperialism hit hardest. It's also a stereotypical Soviet villain. In more fantastical settings, there's often overlap between this trope and the Galactic Conquerer.

An evil version of the Gentleman Adventurer. The racial opposite is Mighty Whitey and the ideological one is Dirty Communists. Foil to the Noble Savage and Badass Native. Will likely be good friends with the Egomaniac Hunter (who may serve as The Dragon) and Human Traffickers, if he isn't one himself in his spare time. Subtrope of Foreign Ruling Class, Politically Incorrect Villain and No Historical Figures Were Harmed. Compare Those Wacky Nazis for the similar ideologies.