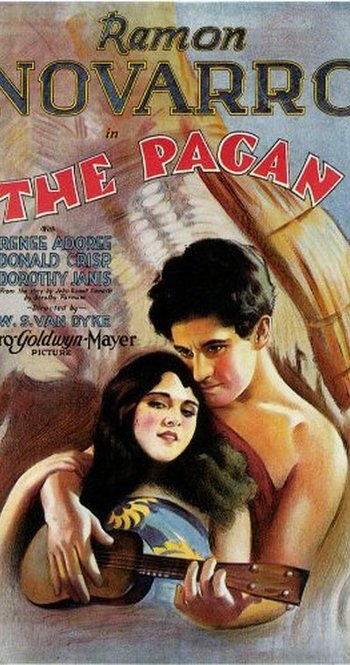 The Pagan is a 1929 film directed by W.S. Van Dyke, starring Ramon Novarro.

A greedy white trader, Slater (Donald Crisp) stops off at an island somewhere in the Paumotu Islands

of French Polynesia, looking for a source of copra (dried cocoanut meat). He is intrigued to hear about one Henry Shoesmith (Novarro), a "half-caste" who inherited a cocoanut plantation from his white father, but has made no effort to work it.

Slater meets Shoesmith, who clearly was raised as a Polynesian and is so innocent and guileless that he simply lets Slater have the cocoanuts for free. Henry becomes annoyed at the frenzy of activity that disturbs his formerly quiet estate, but he's more interested in Slater's young female ward, Tito (Dorothy Janis). Tito is an orphan who has been in the care of Slater for some indefinite period. Slater, who is quite racist towards Polynesians, has been training Tito, a "half-caste" like Henry, to act and talk white. Henry and Tito are immediately attracted to each other, to the extreme displeasure of Slater, who has less than wholesome intentions for his young ward.

Made at the tail end of the silent era, this film has an original soundtrack, some sound effects, and some songs performed by Novarro and Janis. Compare White Shadows in the South Seas, another film shot by Van Dyke in the south Pacific around this same time, which dealt with similar themes.