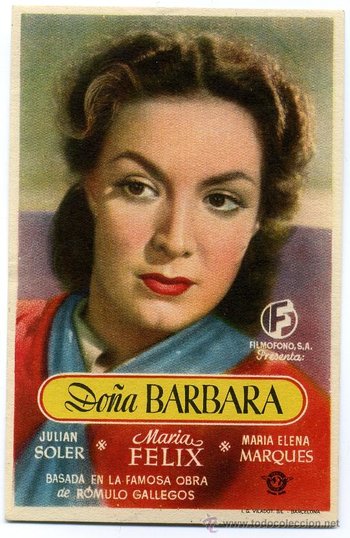 "Killing the centaur! Don't be a fool, Santos Luzardo! You think that about the centaur is pure rethoric? I can assure you it exist. I heard it neight. Every night comes around here. And not only here; There, in Caracas, too. And even further yet. Anywhere one of us go, us with the Luzardo blood, can hear the centaur. You heard it too, and that's why you're here. Who said is possible to kill the centaur? Me? Spit on my face, Santos Luzardo. The centaur is a enthelechy. One hundred years has been galloping in this land, and will remain for another hundred. I believed myself to be a civilized man, the first of my family, but it changed when they told me "come to avenge your father" for the barbarian to return to me. The same happened to you; you heard the call. I will see you on her arms and go mad for a caress of hers."
— Lorenzo Barquero
Advertisement:

Doña Barbara is a 1929 novel by Venezuelan author Rómulo Gallegos. It's the story of Santos Luzardo, a man who is returning to his native land of Altamira, that has been taken over by the woman known as Doña Barbara, an infamous woman with a dreadful reputation who has renamed the place as El Miedo. There, he will try to recover the place by legal means, while his friends try to tell him to kill Doña Barbara and be a man.

On his way there, Santos Luzardo meets Marisela, the daughter of Doña Barbara and Lorenzo Barquero. Barquero is Santos cousin, who was his idol and main inspiration growing up, but has been corrupted by the devourer of men who turned him into n drinker and took his lands. Marisela, who has been raised by a dumb worker from the Doña, is taken by Santos in an attempt to educate her.

Doña Barbara is a story of barbarism versus civilization, inspired by the sociopolitical situation of Venezuela under the regime of dictator Juan Vicente Gomez. Despite being an allegorical criticism of of the Gomez government, the General liked the book and gave it his blessing. In fact, the book gave its author a good reputation among the people of Venezuela, and was a factor in him becoming president in 1948... before being taken out by another dictator nine months later, Marco Perez Jimenez.

The book was adapted into a Mexican movie in 1943, with actress Maria Felix playing the titular character, with author Rómulo Gallegos helping with the script. It has also been adapted into many telenovelas in both Venezuela and Mexico.

The novel briefly became infamous due to Venezuelan president Hugo Chávez calling then President George W. Bush "Mister Danger", like a character from the book, who was an Evil Colonialist.

The prescribed time by law passed for Marisela to enter in holding of her mother's inheritance, of whom no news have been heard, and begone from the Arauca is the name of The Fear, and Altamira returns to be once more.