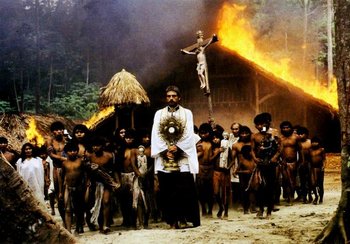 "Oh, the missionary man, he's got God on his side
He's got the saints and apostles backin' up from behind
Black-eyed looks from those Bible books
He's a man with a mission, got a serious mind."
— Eurythmics, "Missionary Man"
Advertisement:

To go with the more simple definition, a missionary is someone who travels far away from home on a religious expedition to another culture. The vast majority of the time, it is making efforts to convert the locals to their faith. While, obviously, dedicated to his religion, he can be anywhere on the range from Sinister Minister to Good Shepherd.

Just about any historical figure who founded a religion could be called a missionary, because they would have had to spread "The Word" to increase the numbers of the believers. The Apostle Paul in the Bible was most well known for his travels throughout the Roman Empire.

In some cases, there are negative implications with regards to the pure intentions of the devout. Sixteenth-century Spanish Catholics set up many missions in South America after the conquistadors left. To some people this might be a case of Mighty Whitey as they are trying to "enlighten the savage" (not to mention, some missions used the forced labor of native people). Indeed, to many the idea of a missionary is a person lurking around in the deepest and darkest jungles of Africa, mingling with the Bushmen. (Winding up in a stew pot with a Cannibal Tribe is optional.)

One common plotline involves a Wide-Eyed Idealist going to the mission field expecting to do some Easy Evangelism, only to have a Crisis of Faith when their targets don't respond quite so readily. Of course, it will probably turn out that God works In Mysterious Ways. (If the Easy Evangelism works, you've probably got an Author Tract on your hands.)

Not all missionaries are motivated by the scriptures to evangelize. Some missionaries are merely sponsored and paid by a church to bring medical and other supplies to areas in need. Either way, a missionary has above-average chance to be a Badass Preacher.

Of course, in more everyday life, people have the image of people knocking on your door asking you to read various books or magazines. Modern missionaries are likely to be from one of two specific organizations:

Examples of Missionaries in Fiction