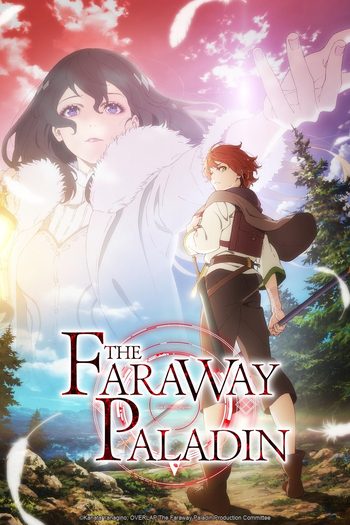 The Faraway Paladin (最果てのパラディン Saihate no Paladin, "Paladin of the End") is a Light Novel series by Yanagino Kanata. In it, a young boy named Will, who reincarnated in another world after a wasted life as a shut-in, is raised by three undead in a city of the dead: the boisterous skeletal warrior Blood, the motherly (and mummified) priestess Mary, and the spectral mage Gus.
Advertisement:

The three undead teach him the ways of the world and he grows to adulthood under their loving care, but when he turns fifteen, disaster strikes as their patron, Stagnate, the god of undeath, comes to collect on the Deal with the Devil they made with him decades ago. He didn't reckon on their Happily Adopted child. Will plants himself between his surrogate parents and the Echo of Stagnate and fights for them, and when all hope seems lost, once again receives the blessing of Gracefeel, the kindly goddess of the cycle of death and resurrection who brought him to this world to serve as her paladin.

The Faraway Paladin mixes Western fantasy with the popular isekai genre, and lampshades, homages, and reconstructs a variety of tropes common to its source material. The series is being translated by J-Novel Club and released digitally. A total of five light novels have been released in English. The following works are available at this time for purchase:

A manga adaptation by Mutsumi Okubashi began production in 2018, published by OVERLAP Inc; it entered English production in two-volume omnibi from J-Novel Club in 2022. An anime started in October 2021, which can be found on Crunchyroll; a second season was greenlit that December.

The Faraway Paladin provides examples of: