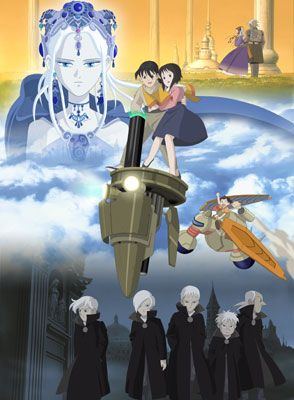 Don't believe anything the art style tells you.
Advertisement:

Fantastic Children is an anime that, despite its more 80s/90s art style, ran from 2004 to 2005. It's an original 26 episode story with plot twists galore, and has received high praise from critics.

The story begins with the mystery of a group of five strange white haired children, who have been sighted at various points throughout history, stretching from the 1600's to the present day. A detective who has heard of this enigma discovers a strange connection between it and a missing persons case he's been working on. Meanwhile, an island boy embarks on a journey with a mysterious orphaned girl who rarely speaks but is constantly painting pictures of bizarre, incomprehensible landscapes. These plots manage to link firmly together into a complex, deeply moving saga. To explain further would ruin things, but let's just say it's a story that links equal parts adventure, coming of age, mystery, tragedy, history, the fantastic, and romance. Yep, there's quite a bit going on in this one.