Screw the Rules, They're Not Real! 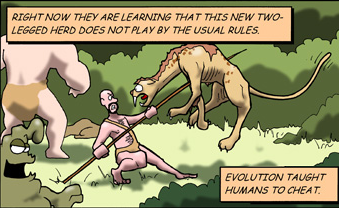 "Feels like taking a test you haven't studied for. Luckily, I cheat."
"The world around us redunds with opportunities, explodes with opportunities, which nearly all folk ignore because it would require them to violate a habit of thought."
— Professor Quirrell, Harry Potter and the Methods of Rationality
Advertisement:

There are things you don't do, not because they're evil, nor because they wouldn't work, but just because you don't. Until this trope applies. Then you do them, and you win.

Your enemy is likely to accuse you of "cheating," but why should you care? He's your enemy. If you make a habit of it, you may take it as a compliment. Beware, however, because should you partake in this trope, your enemy may choose to stop following the rules themselves.

Compare and contrast Outside-the-Box Tactic which requires more cleverness and gets respect. That trope requires "clever strategy" or "unintuitive insight", whereas this one only requires failing to block off some option as forbidden. Ironically, the trope namer for that

is really an example of this.

Also compare and contrast The Unfettered, who takes the same approach to moral restrictions.

Furthermore, compare and contrast There Are No Rules, which is an in-universe stock phrase and generally not meant literally. When a fight promoter declares "The only rule is there are no rules" and is thinking of biting and ball-kicking, it's that trope. When one of the fighters hides a friendly sniper team in the audience, it's this one.

Contrast Dick Dastardly Stops to Cheat, which is roughly the opposite — playing fair is the sort of thing Dick Dastardly doesn't do, but not for any good reason. If Mr. Dastardly were to play fair, laugh at the heroes' pointless attempts to foil his nonexistent cheating, win the contest and enjoy the prize, it would be this trope.

There are no-good-reason rules that show up a lot, so ignoring a specific one may be a trope in its own right, including: