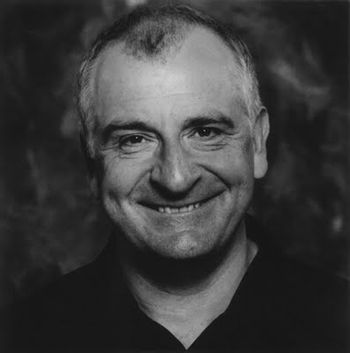 A British humorist and Science Fiction writer, most renowned for having written The Hitchhiker's Guide to the Galaxy "trilogy", the Dirk Gently series, and three Doctor Who stories during the Tom Baker era (he was the script editor during Season 17).

A really hoopy frood, he was very fond of deadlines (he "liked the whooshing sound they made as they flew by") and always knew where his towel was.note Actually, he didn't. That was where the joke came from: he could never, ever find his towel, and figured that it was probably symptomatic of the general disorganization of his whole life. Anyone who actually knew where their towel was, he reasoned, would have to be a really together person. His interests included evolutionary biology, software technology, Apple computers, the music of Pink Floyd, Bach, and The Beatles, and SCUBA diving. He was involved in a BBC radio production (and then book) with Mark Carwardine called Last Chance To See, where he made his case for the necessity of biodiversity and the need for conservation initiatives, and also for paying comedy writers to go on holiday. He also considered himself a radical atheist, but the "radical" bit was just to show people that he was serious about it (as opposed to merely being agnostic), not because he was intolerant or aggressive.

Hitchhiker was constructed in a typically Adams fashion — he was notorious for cribbing from his own previous works, and a good many aspects of Hitchhiker had been put to paper in some form (mostly Adams' own plays and unpublished short stories) before the series itself was conceived.

In true Douglas fashion, he advocated using exercise as a way of combating his depression, then died of a massive heart attack at age 49 while at the gym. Because of where he was living at the time (Santa Barbara, 2001), Adams actually was carrying a towel when he died. Many of his fans find this to be very bittersweet.

Adams has been honored with an asteroid, 25924 Douglasadams, being renamed for him; the asteroid's prior designation (2001 DA42) is notable in that it coincidentally carries the year of Adams' passing; his initials; and the Answer to the Great Question of Life, the Universe, and Everything. Adams would quite probably see such a coincidence as solid proof that the universe has a sense of humour.

His gravestone is in Highgate Cemetery in London, which is open to the public (it houses the graves of many famous people, including Karl Marx) and is frequently to be found adorned with a small towel (of course), and also a pot of visitor-donated ball-point pens, both in reference to him being a writer, and to a passage in Hitch-Hikers where he mused on how ballpoint pens, by dint of their habit of disappearing whenever you really needed one, were probably some kind of advanced life form that had slipped away to enjoy a uniquely biroid lifestyle on their home planet.

Little known fact: Adams invented the wiki before Wikipedia even existed. H2G2, an online encyclopedia system conceived by Adams, was launched in 1999, and predated Wikipedia by two years. Both Wikipedia and H2G2 depended on information contributed by the public, although H2G2 required that editors, staff on Adams' payroll (later, staff on The BBC's payroll), approve of certain contributions before it can be published.

In The Hitchhiker's Guide to the Galaxy

Tropes Associated with his Work: