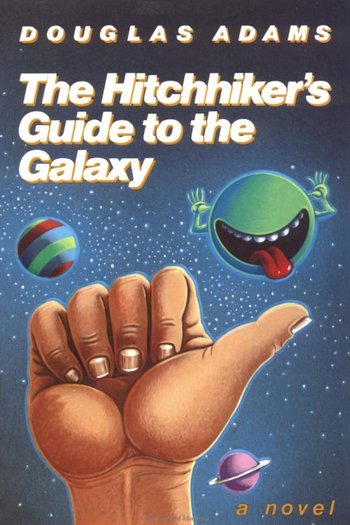 ...one Thursday, nearly two thousand years after one man had been nailed to a tree for saying how great it would be to be nice to people for a change, a girl sitting on her own in a cafe in Rickmansworth suddenly realized what it was that had been going wrong all this time, and she finally knew how the world could be made a good and happy place...

This is not her story.
Advertisement:

Arthur Dent is your typical English Everyman. He lives in a sleepy English village on this Insignificant Little Blue Planet known as Earth. His life is so desperately ordinary that he could not possibly know his best friend, Ford Prefect, is not in fact, from Guildford, but is from a planet in the vicinity of Betelgeuse. As a roving researcher for The Hitchhiker's Guide to the Galaxy, Ford went to Earth to do some research... and has been stuck here ever since.

And then, one dull Thursday morning, Ford shows up at Arthur's house, claiming the world will soon be demolished by strange creatures called Vogons. And it all just gets weirder from there.

The Hitchhiker's Guide to the Galaxy provides examples of the following tropes:

And remember, always know where your towel is.