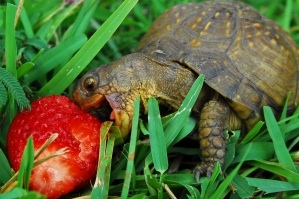 Mmmm, strawberries! With their bright red bodies, charming star-shaped leaves, and tart, juicy taste, it's not hard to see why they're so well-liked the world over. They go great with chocolate. They make a good flavoring for ice cream, milk, milkshakes, or yogurt. They make delicious jams and syrups, perfect for toast, pancakes, or crepes. They're just plain good all by themselves.

It's not surprising, then, that strawberries have also become one of the more popular symbolic fruit. Not quite as much as apples, but they've earned their own place. They generally show up in order to imply one of two things:

In Japan, "Strawberry" is a popular word for utterly random anime titles, though you can bet that series with "Strawberry" in the title will be an adorable shoujo series... or at the very least, quirky. As it happens, the Japanese word for "Strawberry" is a homonym to the popular name Ichigo, though there are lots of different ways of spelling it, and to the number 15. As such, expect puns.

Before adding an example, make sure the strawberry actually means something. This trope is not just "Strawberries are mentioned".