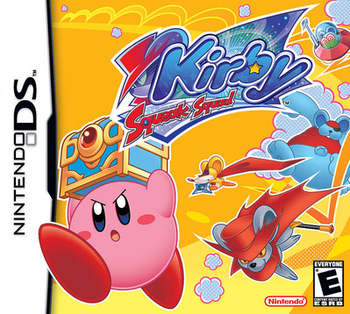 Kirby: Squeak Squad (Hoshi no Kirby: Sanjō! Dorocche Dan, or "They've Arrived! The Dorocche Gang" in Japanese, and Kirby: Mouse Attack in European languages) is the second Kirby game for the Nintendo DS, released in 2006.

One day, Kirby was about to eat a delicious slice of strawberry cake when suddenly, it was stolen! Kirby assumes that King Dedede did it, but he's innocent this time. Who took the cake? This must be the work of Daroach and his gang! Kirby goes after the rogue rodents, only to find that they're after something more important than cake...

Gameplay remains similar to previous installments (namely Amazing Mirror, minus the Metroidvania gameplay), with the addition of the touch screen (representing Kirby's stomach) acting as the inventory for the titular pink puffball to store items in. In addition, new Copy Abilities are introduced: Animal, Bubble, Metal, and Ghostnote only unlockable if you managed to get all parts of the mysterious Ghost Medal, which summons a midboss so you can inhale it for the ability. Some Copy Abilities also interact with the environment (for example, Fire burns down tall grass), and some abilities (namely Sword or Bomb) can be combined with various elements (for example, Fire Sword and Ice Bomb).

Throughout Kirby's journey to get his cake back, he'll often encounter the Squeaks, a Quirky Miniboss Squad with the habit of stealing treasure chests wherever they go. They usually appear where there's a large treasure chest, and if they steal one, Kirby has to enter one of their hideouts to take it back from them.