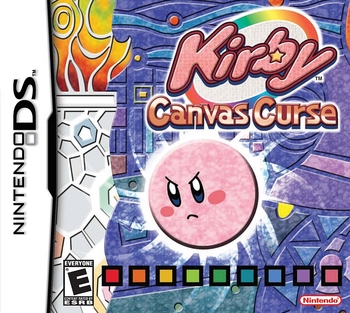 Kirby: Canvas Curse (Touch! Kirby in Japanese, and Kirby: Power Paintbrush in British English) is the first Kirby game for the Nintendo DS, released in 2005. Kirby has lost his limbs due to a curse from an evil sorceress known as Drawcia, who went on to transform Dream Land into a world made of paint.
Advertisement:

The player takes on the role of Drawcia's rogue paintbrush and must make extensive use of the DS's stylus to guide Kirby through the art-infested Dream Land. 10 years later, it received a Spiritual Successor on the Wii U called Kirby and the Rainbow Curse.