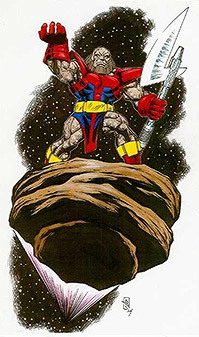 Yes, Terrax, herald of Galactus,
is flying through outer space on a rock. The Power Cosmic has its perks.
"That wasn't flying! That was falling with style!"
— Woody, Toy Story
Advertisement:

The power of Flight has been a human dream since before speech. Is it any wonder that so many Superheroes can fly? Actually, it is.

Pretty much every hero with any power (or none) can fly, the reason being that they can "improvise" a power that's not quite flight out of their existing power set or simply use jetpacks. Assuming they give an explanation, of course. Sometimes the writer would prefer a pseudo-scientific explanation to a non-scientific explanation. (Stan Lee admitted he is one of these.) Super strong heroes can "Leap higher than a tall building", those who can phase through matter will usually be able to walk on air/float (a kind of Required Secondary Powers), and heroes with grappling hooks can do a Building Swing. Sometimes there is a big winged creature too large to sustain flight that the writers explain as gliding rather than true flight, or a pyrokinetic being able to make themselves "lighter than air" or make jet-boots by shooting fire from their feet.

The reason for this is twofold; heroes will need transportation, or it's just plain so cool that they've gotta have it as part of a Flying Brick (or similar) package. This has pretty much devalued heroes whose sole power is flight into the same category as heart. The exception is if the team has ready access to a jet or other vehicle, at which point the number of flyers gets substantially smaller.

If you think about it, superheroes who can generate or control a floating platform, and then stand on the platform, are basically doing Baron Munchausen's old trick of lifting himself by his own bootlaces.

For those without any of these means of recourse, well… there's always Roof Hopping. Sky Surfing is a subtrope. See also Power Floats and I Believe I Can Fly.

Mr. Pigeon cannot fly (despite a few attempts at flapping his arms), but since he can control the birds he uses a flock of them to be carried around.

Mr. Pigeon cannot fly (despite a few attempts at flapping his arms), but since he can control the birds he uses a flock of them to be carried around.