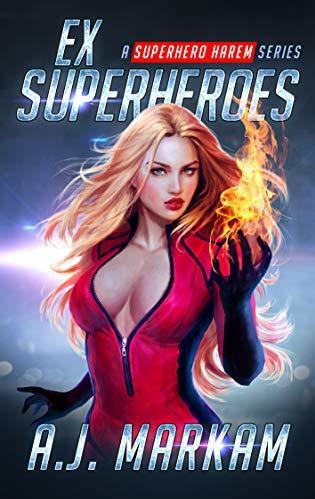 Nova is hot (in more than one way)
Ex-Superheroes is a series of novels by A. J. Markam that are a cross between a superhero story and a Harem Genre, currently consisting of three books.
Advertisement:

At some point in the 21st century, a drug called Ephemera is discovered that can be used to give people superpowers. The seven largest economies (informally called the S7) band together and sign a treaty on non-proliferation of Ephemera, essentially cutting other nations out of the superhero club. This results in a vibrant illegal Ephemera trade, especially to freedom fighters across the world. The official term for a superpowered human is a Super-Powered Combatant (SPC). Any crime committed with the use of powers automatically carries a tenfold prison term.

Hunter McNeil is an ex-Army Ranger and a former member of the Super-Powered Combatant Corps, a branch of the US Military that utilizes superpowered soldiers to combat the enemies of the US. His ability to generate force fields is extremely versatile. However, he grew disillusioned with the SPCC and resigned, becoming an Ephemera smuggler, seeking to help freedom fighters level the playing field against the S7. He gets captured and is sentenced to 50 years in a supermax prison for supervillains.

A prison break allows him to escape, but he gets re-captured by the SPCC and is recruited by General Harding. It turns out that a coordinated strike across the globe has eliminated every superhero in the world (including the freedom fighters Hunter has helped). Shortly after that, supervillains took control over all the major cities, declaring that a thousand hostages would be killed daily in every city if any government tries to retake them.

While the General initially wants Hunter to infiltrate the supervillain community and discover the mastermind behind the strike, Hunter instead proposes to form his own team of disgruntled SPCs and take out one supervillain after another, with each member promised a full pardon and $10 million. However, Harding isn't about to send Hunter without oversight, so he sends Lieutenant Angelica "Nova" Smith, a pyrokinetic and a rookie with him.

As it happens, all the SPCs Hunter intends to recruit happen to be women. Smoking hot women with large breasts (just the way Hunter likes them). This includes Nova as well. Lots of sexual hijinks ensue.